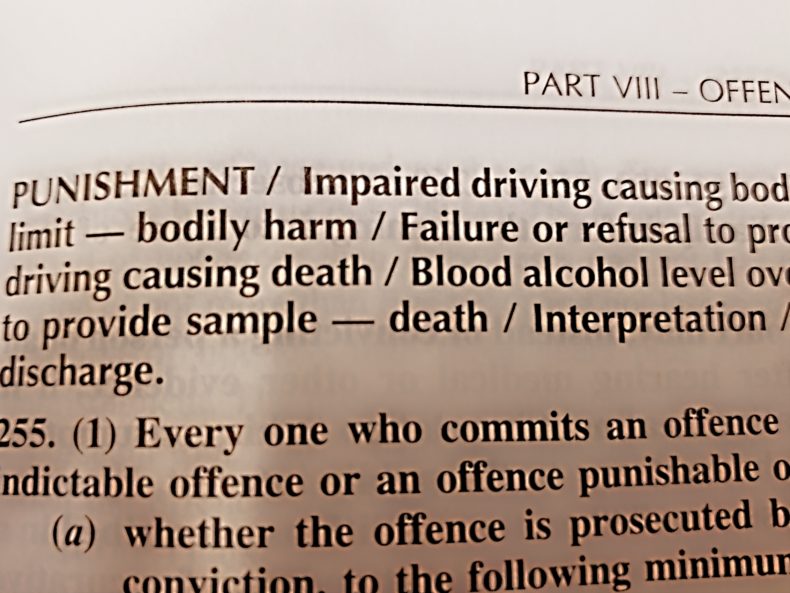 The Criminal Code prohibits driving a motor vehicle while impaired by alcohol, drug, or a combination of the two. The amendments to the Criminal Code has also made it an offence to have a certain level of alcohol, cannabis or other scheduled drugs in the blood within two hours of driving. The minimum penalties for these offences vary depending on the circumstances of the offence, the offender’s level of impairment, and their prior record.

For first offenders, the minimum fines for driving while impaired by alcohol varies based on the following blood-alcohol concentrations:

In the case of all the above noted charges, the offender will also be prohibited from driving:

With the consent of the Crown Attorney, the court may permit the offender to complete a substance abuse treatment program after being found guilty, but before sentencing. During this time the offender will be prohibited from driving. After successful completion of the substance abuse treatment program, the offender will be sentenced. During this sentence, the court is not required to impose the minimum penalties or driving prohibition.

Failing a drug screening test, physical coordination test or a drug recognition evaluation, will result in an immediate Tiered Administrative Licence Suspension. This suspensions ranges from 72 hours to 60 days, depending on how many previous suspensions you have received within a 10-year period. In addition, your Driver Safety Rating is reduced by five levels.

You will receive a three-month Administrative Licence Suspension if:

In addition, your Driver Safety Rating is reduced by five levels and you must pay a driver’s licence reinstatement charge and complete an impaired driver’s assessment. The vehicle involved in the incident will be impounded for 30 or 60 days depending on the offence committed and concentration of alcohol in the blood. The owner is reasonable for paying the impound fees before the vehicle is released. Impound rates are set by regulation. About $60 for the tow, and $15 for storage per day after the first day. Thus, a 30 day impound would cost approximately $495, while a 60 day impound would cost approximately $945.

If you are convicted of an impaired driving offence under the Criminal Code, your Driver Safety Rating will be reduced between five to 15 levels. For a first offender, their licence will also be suspended for a period of one year, or in the event the conviction is for refusing or failing to provide a breath, saliva, or blood sample, for a period of two years. For subsequent convictions, the period of suspension incrementally increases to a maximum life-time suspension. In some cases, your vehicle may be forfeited to the province.